The case for Emerging Market Debt

I was recently invited by an asset management firm to take part in a conference on emerging market corporate bonds, an asset class that has been particularly popular lately. The manager of the fund in focus shared some insight that would have been difficult to get otherwise, so I did not lose my time. During his speech, he made one observation that I found particularly relevant: emerging market corporate debt is an asset class that is "to large to be ignored". In other words, if you are in the process of building a diversified investment portfolio, you basically have to take a stance: either you incorporate these type of bonds or not. This is an asset allocation decision you have to make, you cannot just overlook that market.

The remark can be extended to the larger Emerging Market Debt (EMD) complex that is  also encompassing sovereign issues. Fund flows indicate that a lot of investors are enthusiastic about this market,  which is understandable given the good issuers that can be found and the attractive yield/risk profile that many bonds exhibit.

Over the past few months however, the interest has turned into some kind of frenzy and several observers are calling a bubble. Recent events do indeed surprise: in October last year, Bolivia issued a $500 million 10 year bond at par with a coupon of 4.87%. This is a low yield for a BB (hence "junk") issuer with a rather poor track record with foreign investors. Still, the bond  managed to be 9x oversubscribed in a sign that market participants are fighting to get their slice - maybe without going through a proper due diligence process.

Emerging Market Debt is neither "good" nor "bad" and all subgroups do not look bubbly at the moment. It is a universe that can produce investment vehicles having a positive impact on a portfolio if they are well understood and added on decent valuations and in the right context. Let's go through the basic features of these markets before looking at the current opportunities and risk to consider.

A brief history of the asset classes

Emerging Market Debt (EMD) is commonly broken down into three subgroups that exhibit different key characteristics, they are all "asset classes" of their own.

Hard Currency Sovereign EMD is the most mature of the three categories and covers bonds issued by governments in USD and, marginally, in EUR. In a not so distant past, financing to emerging market countries was essentially provided by developed market banks in the form of loans, mainly USD denominated. Issuing in a "hard currency" rather than in the debtor's own protected lenders against inflation and foreign exchange rate manipulation that were not rare phenomena. This all went rather fine until the 80's, when a series of Latin American countries started defaulting on their debt causing troubles to US banks. In order to help those financial institutions in shoring up their balance sheets, the US Treasury made it possible to convert those bad and illiquid loans into tradable instruments coming with more guarantees from the debtors.  When they started selling these so-called "Brady Bonds", by the name of the Treasury Secretary of the time, banks removed the risk from their books and created a market for hard currency sovereign EMD.

The second sub-type is the local currency sovereign EMD. It gained pace when the improving fundamentals of emerging countries enabled them to issue debt in their own currencies, making them less vulnerable to adverse foreign exchange markets movements. The trend was reinforced by an increased domestic demand for savings vehicles and the development of financial services and local pension funds looking for places to park money to cover future liabilities. Today, Local Currency EMD is about three times bigger than Hard Currency EMD and has seduced investors wanting to bet on an appreciation of emerging market currencies vs G3 or G10 currencies.

Corporate EMD, the third subgroup, has been booming over the past decade and has grown into a well diversified asset class across countries and industrial sectors. It also comes in both local and hard currency flavors but is mainly accessible in the latter form to foreign  investors. Issuance of hard currency corporate debt has grown rapidly; from a USD 46 billion market in 1998, it reached USD 411 billion in 2010 and almost doubled in two years to get to USD 803 billion at the end of 2012.  Part of the success is due to an increased demand for high yield instruments by international investors and to investor-friendlier corporate and accounting information.

"EMD is big, it is getting bigger and that's great". Try to say that with enthusiasm to a seasoned credit analyst and he will probably think that you are out of your mind (growing debt piles are rarely seen as a sign of health in the profession). After this punch line, try to add a pinch of salt to your statement by putting forward some figures about the current level of indebtedness, the issuers creditworthiness and their dynamics. These are all quite good looking.

The average balance sheet leverage of corporate issuers in emerging markets is lower than those of their western counterparts and sovereign have lower debt-to-GDP ratios than what can be seen in industrialized countries after almost five years of debt crisis. Several Sovereign EMD issuers are also backed by solid economic fundamentals like higher economic growth rates, good demographics, important foreign exchange reserves, current account surpluses and access to strategic resources that are hard to find in the "West”.

Rating developments are also in favor of EMD that has been enjoying more rating upgrades than downgrades over the past few years, not quite the same as in the industrialized world. Default and recovery rates are also in good standing and do not differ very much than what can be seen in advanced economies High Yield (HY) corporate world.

We can take a dive into the composition of the three EMD sub-categories by analyzing the reference indices that track them. Inclusion to these benchmarks requires to pass some tests in terms of issuer quality, issue size, liquidity,... and all the paper out there do not qualify. Even though they are not comprehensive, those indices have the big advantage of being more "investable" than the wider universe, they are thus a better gauge of what the actual market is for investors.

The three indices that are commonly used are published by JP Morgan:


The total market value of those indices stood at $1.35 trillion and was broken down as such:

Below is a graph giving you an idea of how these market compare in size with more established ones. These figures are not based on the exact same indices but they also give a valid picture of the markets. (IG stands for Investment Grade credit -> BBB- or above, HY stands for High Yield -> BB+ and below)

The three indices are somewhat different in the exposure they offer to countries and sectors. The corporate debt index is tilted towards Asia, hard currency EMD gives a big weight to Latin America. Local currency gives similar weights to the two big regions but no exposure to the Middle East.

In terms of number of issuers, the corporate index is the most diversified one with 391 different names as of November 2012. The hard currency index comes second with 44 countries followed by the local currency index with only 14 members. The fact that there are less local currency issuers is logical as you have to meet tougher criteria to be able to borrow in your own currency.

Looking at types of economies, local currency gives more weight to commodity exporters and hard currency sovereign lays more on the side of manufacturing countries. 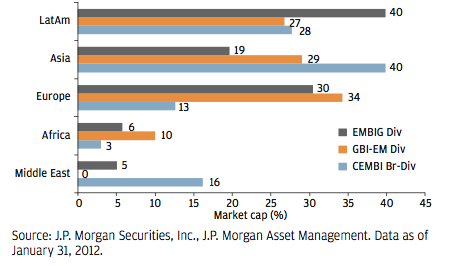 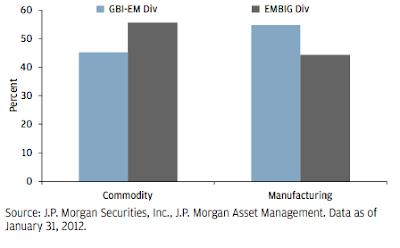 Risk and return, as measured by yield to maturity, duration and ratings also vary among EMD indices. The highest yield, the shortest duration and the best average rating are all available in local currency EMD. This sounds very attractive but investor are also exposed to currency movements that can induce a lot of volatility, with the potential to offset capital and carry gains. The better credit quality is logical as only those countries with good fundamentals are able to borrow in their own currencies.

Here some key factors for each EMD group:


The following graphs, taken from a report from the excellent M&G Bond Vigilantes blog (here), show the historical relationships between EMD and other key developed markets. They do not tell the whole story, however, as past performance is not a proxy for future returns, as any disclaimer would tell. 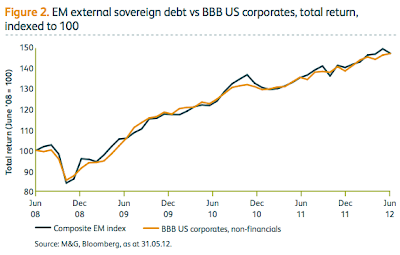 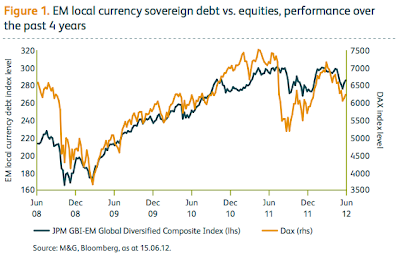 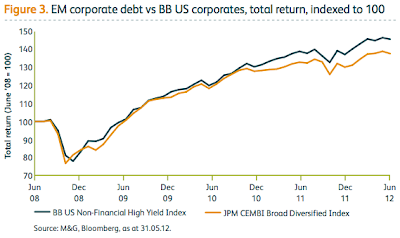 Hard currency debt appears fairly valued now and its higher sensitivity to US Treasuries doesn't look good with the perspective of higher rates going forward if the US Fed changes its tone or if markets anticipate a shift in policy.

Local currency sovereign bonds give 400bps yield pick-up to the average yield of sovereigns in the developed world with an Investment Grade status. There is also upside in the form of currency gains: emerging countries are not printing money, they sit on important foreign exchange reserves and they have lower debt levels. Interest rates are not expected to change much this year in the absence of a shock to the global financial markets. This is an interesting spot.

Corporate EMD is growing in depth and breadth. Capital flows are supportive and credit dynamics as well. It is also the universe that gives the biggest exposure to Asia which is still the fastest growing region of the world. The current spread to US Treasuries is comfortable and not pricey in historical perspective.

As a conclusion, I think that any allocation to EMD should currently give more weight to Local currency Sovereign and Corporate EMD. The former has a better overall quality and gives upside on the currency side, the latter gives more credit risk but is less sensitive to currency markets and should do better in risk off markets (often causing the USD to rise). Hard currency EMD should have a smaller allocation given its current valuation.

Trying to build your portfolio with individual bonds is not reasonable. Efficient diversification cannot be achieved with 10 to 20 bonds and, even if market are improving, they still do not have the liquidity of IG or even HY bonds.

ETFs are proliferating, but these just copy the benchmark blindly and do not take any measure to mitigate risks that could emerge in the market going forward.

These asset classes are ones in which it makes sense to pick up 2-3 good fund managers that could still beat the benchmarks by carefully selecting issuers and bonds instead of buying everything that is issued just because it is out there. EMD funds can provide you the liquidity and diversification that should make you sleep better, so they are worth considering.

That's it for today, see you around soon!