After a good start of the year, boosted as they were by the Draghi-Rally since July and by the vanishing threat of a fiscal cliff-led recession in the US, European markets kind of lost stamina. They were even severely hit last week because of political turmoil in Italy and Spain that reignited fears over the sovereign debt crisis. The setback was a good reminder that there is still no end-game in sight and that caution remains warranted, especially with a sluggish economic backdrop.


Yet equity valuations are (still) attractive and cautious long term investors could benefit from future corrections to make opportunistic additions to their portfolios. This implies that they know what they are looking for. If not, reading this article (and the next) might help. The objective here will be to focus on European companies with a market capitalization under €7.5 billion and to identify some that have the potential to be future winners.

Before looking at single companies in details, let's familiarize with the universe we will be working with. For the purpose of the analysis, I will slice the Russell Developped Europe Index and create subgroups according to market capitalizations as follows:


This is arbitrary but somehow fits the commonly accepted definitions in USD terms. For simplicity I will also use the term 'larger caps/companies' to designate the companies that are above €7.5bn and 'smaller caps/companies' for the others.

The smaller cap universe is rich. Even if it only represent 25% of the total European market by size, this subset makes up 86% of the stock count with 1624 individual names. Furthermore, smaller companies are active in 147 different GICS sub-industries, which is more than double the 71 that can be claimed by Mega and Large combined. These figures clearly tell that we are by no means restricting ourselves by going down the size ladder. On the contrary, we are broadening the perspectives.

I have taken the three Stoxx Europe 200 indices (Large, Mid and Small) to compare the annualized total returns (price + dividends) of different segments over time and the results speak in favor of smaller companies. Mid caps did a better job than large ones for investors on 1, 3, 5, 10 and 20 years periods back from now. Small caps outshined the middle sized ones on 3y and 5y time windows. Adjusting for risk (dividing the annualized total returns by the annualized volatilities), the results stay in favour of smaller companies with the exception of last year.

This analysis is fine but too dependent on the reference point we are selecting (the 31st of January 2013). Looking at rolling annualized returns will give us more insight and a feel of how benchmarks behaved over different market cycles.

The graph below looks at 5-year risk adjusted returns for holding periods starting on the first of January in year 1 until the 31st of December of year 5. We will start in 1993 to have a 20 years span as in the previous analysis.

Even if it was good to hold big companies in the 90's, it seems that going smaller was an advantage in periods beginning after 2002. Smaller caps had a better recession and a better recovery than larger ones. The most recent data points show that large caps are still losing on the 2008-2012 period, whereas small and mid managed to recoup the losses of the financial crisis. Bigger doesn't really mean stronger, at least in aggregate benchmark terms.

A common shortcut argument consist of saying that smaller companies are more dependent of their domestic economies. It is true, but it casts a shadow on the ability with which small and mid caps managed to tap emerging markets growth. The graph below is based on data from companies belonging to the Russell Developed Europe Index that reported revenues per geographic segments (data available for 92% of the Mega caps, and for 78%, 82% and 84% of the large, mid and small caps respectively). If they are in average markedly less exposed to markets outside of Europe, mid/small/micro caps do not lag in terms of Emerging Markets exposure.

Mid and Small Caps get less analyst and news coverage than heavier weights, which means that there are potentially more market inefficiencies to be exploited there. In addition to lower level of 'sell-side' implication, there are also less mutual funds active in the space, resulting in less crowded trades.
The graph below shows the average number of sell-side analysts covering a stock in each of the market cap segment: mid and small are less popular which can be an advantage.

The following table is taken from a MorningStar article on European Mid Cap investing. The analyst looked at the assets managed by funds explicitly focused on Large/Mid/Small Caps and compared them to the market cap of benchmark indices (the Stoxx Europe 200 Large, Mid and Small). The Small and Mid Cap funds represented only 3.9% and 7.1% of their respective benchmarks market cap, well below the 14.5% achieved by those following large caps. The study dates from November 2011 but I doubt that the gap has been closed since then (full article here). 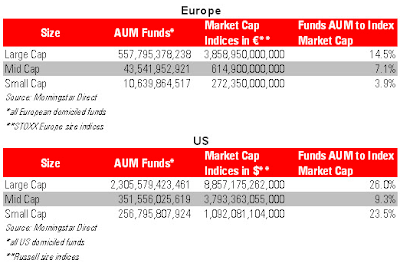 Small caps tend to be focused on their core business, they have less divisions and product lines than bigger companies. This can help in the analysis and in projecting future cash flows and earnings. Moreover, due to their small size and focus, they can be ideal M&A targets of bigger players looking for growth they cannot generate organically. M&A activity has been low in 2011 and 2012, yet cash is abundant on the corporate balance sheets, so there could be an uptick in takeover moves going forward. Identifying potential preys can translate in nice performance boosters.

Mid caps have had the time to prove themselves and still have a lot of potential they can exploit. In other words, it's a universe of well structured companies with a track record you can examine and potential for growth. All mid-caps do not become larger players, but the animal spirits of their owners and managers push a lot of them 'up' that road.

These are arguments that I cannot prove with hard data, however.

Up to here we have been looking at the European Smaller Cap segment in very broad and quantitative terms. What we can say is that in aggregate, those companies are performing very well in risk-adjusted terms, they provide broad diversification potential across industries, are well exposed to emerging markets and are doing all this without attracting too much attention.

In the next post, I will follow a bottom-up approach and screen the smaller cap universe in search of stocks that could be candidates for successful investments.

Until then, have a good time and enjoy everything you do.