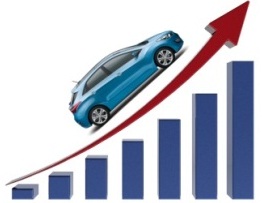 I find it hard to get excited by carmakers, even with the motor shows season going on. European producers' woes and the gloomy guidance they're giving after years of negative growth is one reason. Another one is the fading momentum in the US after three years of pent up demand and a full industry overhaul. Overlooking the sector would however be a mistake with the current consensus centering on a 3% to 6% increase in global auto sales for 2013. Not bad and above the 3% world GDP growth forecast of the World Bank.
With the European car market most probably continuing its downtrend in search of a bottom and the US losing pace, a reasonable conclusion is that something is at works in some other region. It appears that the variable balancing out the equation is, not a real surprise, Asia-Pacific:

New car sales in Asia rose 10% through 3Q, compared with 0.1% growth for the same nine-month period in 2011. Consensus real GDP forecasts in Asia call for 6.8% growth in 2013, the highest of any region, and 6.9% in 2014. Economic expansion at these levels is conducive to wealth creation and new car demand growth - Bloomberg

I did not perform a top-down macro analysis to uncover those facts. I started looking at the auto industry story because Hyundai Motor Company (HMC) caught my attention while I was screening stocks in emerging markets and Asia. It turns out that in addition to nice valuations metrics and appealing financial ratios, the company is well positioned to ride supportive market dynamics in its home region and beyond.


HMC, together with his affiliate Kia (36% stake), belongs to the top 5 car producers worldwide with a 5% global market share. This South Korean chaebol benefits from a strong domestic franchise and is ideally located in the in the buoyant Asian region that makes up 44% of their volumes. Western countries are also important, but less so, with the US and Europe representing 16% and 11% of their order book respectively (2011).

The company offers all types of vehicles from city cars to SUVs and sedans. A lean business model, competitive pricing and the attractiveness of their cars re-designed by the former Audi/VW wizard Peter Schreyer, have enabled them to gain market shares from other players in key markets they serve over the past few years. In H2 2012 for example, Hyundai and Kia were the only brands gaining pace in Europe (+12% and +24%) while German, French, US and Japanese competitors suffered declining demand ranging from -1% for BMW to -17% for Fiat and Renault.

In the second half of 2012, the situation got more difficult. Like any Korean producer, Hyundai faced stiff headwinds from a strengthening Korean Won (+8% vs. USD and +11% vs. JPY for the whole of 2012). These forex movements eroded their competitiveness at home and abroad and lowered the profits recorded from overseas operations. On top of those currency swings, claims about Kia's advertised mileage consumption in the US cost the company USD 220m to settle and caused a sharp drop in Q4 2012 profits.

So here we are; the stock suffered for the most of 2012 and is now attractively valued. More favorable FX trends and good execution on a business strategy focused on increased profitability should be triggers for re-rating. The following are some pros and cons to the investment case.

Overall, the risks are outweighed by the opportunities for HMC. I like what I've seen and read about this company and will definitely keep an eye on it. Fundamentals, market evolutions, current stock price behavior and the support level around KRW 200k make it a buy, in my view.

See you around soon,